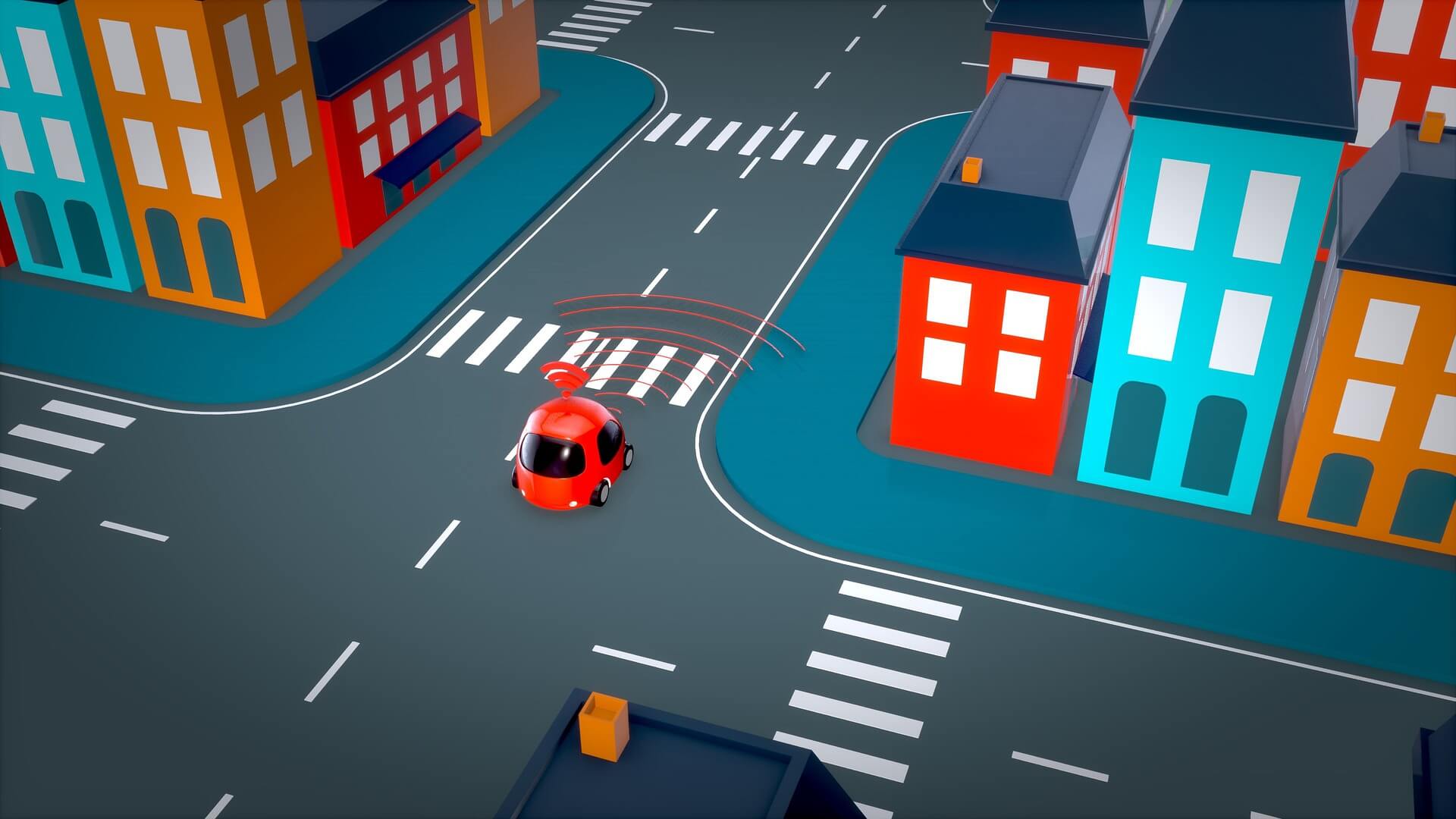 Just a couple of decades ago, the thought of autonomous vehicles or self driving cars belonged to the sci-fi area. Today, many self driving car statistics are there to tell the truths of this breakthrough in the automotive industry.

Consequently, a number of tech and automotive companies strive to get hold of this technology. It will be a part of our lives sooner than we expected.

Now let’s get into some interesting stats and facts about these driverless autos.

1. There are 6 different levels of autonomous driving, ranging from Level 0 to Level 5.

The SAE International (Society of Automotive Engineers) provided industry standards that the US Department of Transportation and the United Nations both adopted as guidelines.

But in levels 3 to 5, the driver doesn’t drive. However, when SAE level 3 is in question, they must drive when the feature requests it, which makes it a bit different from other levels.

2. According to Waymo self driving car statistics, its models covered 20 million miles since 2009 when they were created.

Waymo is a self driving unit of Alphabet Inc, and it’s considered a leader in the race for deploying self driving vehicles. The company announced that it took a decade to complete its first 10 million miles, and only over a year to complete another 10 million.

One of the more interesting facts about driverless cars is that Waymo has begun offering completely automated rides to the public without backup drivers.

3. 56% of Gen Y and 55% of Gen Z consumers expressed more interest in both partially and fully autonomous vehicles.

According to the survey published by Deloitte, many 25-34-year olds were more open to fully automated cars, and 60% of the same age group said that they would be comfortable with car automation features that take the full autonomy of driving.

On the contrary, they’re less willing to pay for such vehicles. Only 24% of pre-boomers and baby boomers (people born between 1928 and 1964) expressed an interest in fully self driving vehicles.

4. Driverless car statistics show that in 2018, 63% of US consumers would likely ride one if the automaker was a brand they trusted.

Autonomous vehicle statistics show that 83% of Korean and 63% of German consumers would be more likely to ride an automatic vehicle with a well-established safety record, along with 71% of US consumers.

Brand trust plays a big part in the considerations a consumer makes in dealing with a self driving car. This percentage increased by 9% compared to 2017. Younger generations put more faith in brands.

5. It’s estimated that investments in the autonomous technology ecosystem revolve around $80 billion.

A recent study done by the Brookings Institute showed that between 2014 and 2017, autonomous vehicle activity recorded an upward trend. It reached the $80 billion mark and is expected to increase due to the technological race to deploy self driving vehicles.

The collected data is related to more than 160 separate deals, such as investments, acquisitions, and partnerships. Investment activity was mostly present in the US, but also in countries such as China, Germany, Israel, and the UK.

6. Based on a Gallup poll from 2017, 53% of the US respondents stated that self driving cars would be more common in a decade.

Another 28% of respondents believe that it could take more than 11-20 years for them to become more commonplace, and 15% say autonomous driving vehicles would take longer than 20 years.

This poll was only a part of a Northeastern University/Gallup survey regarding Americans’ attitudes toward artificial intelligence. That survey found that only 23% of Americans would feel comfortable riding in a self driving car every day, and 59% stated the opposite.

Various AV companies that were permitted to do testing with a safety driver had a total of 2.88 million miles, as the recent 2020 DMV report in the state of California shows.

There was an increase of more than 800,000 miles from the previous reporting cycle. What’s more, 64 AV companies received permits for testing self driving cars on the public roads of California.

The California Department of Motor Vehicles approved valid permits for AV companies to test their automated cars with safety drivers. Only one company, Waymo, has a permit to do a driverless car test on public roads, the driverless car statistics show.

8. In 2004, 15 teams received approval to compete in the first DARPA Grand Challenge, a driverless car race in the US.

There were zero winners in the first race, which left the $1 million prize unclaimed. However, the 2005 race had five vehicles that successfully completed the competition.

The Stanford racing team won $2 million for finishing the race first, with a record of 6 hours and 53 minutes. This brought about a lot of collaboration and progress in the field of autonomous vehicle technology in the following years.

9. According to autonomous vehicle statistics, 69% of Americans think that self driving cars would have a positive impact on helping elderly or disabled people to move around.

This was the only measure that resulted in a majority of responses. However, 21% of Americans believe the opposite, while 10% think that driverless cars would have neither a positive nor negative impact on helping disabled and elderly people.

The other measures, such as the number of deaths, accidents, quality of the environment, traffic congestion, and the automotive industry were closely divided.

Waymo drove a total of 1.45 million miles in 2019. Google’s self driving arm obtained a permit to operate as a Transportation Network Company (TNC) in Arizona.

It claims that its costs could be competitive with Uber and Lyft. This program is only available to several hundred riders, with safety operators behind the wheel. However, Waymo will increase availability over time.

It’s certain that traditional manufacturers don’t see returns on investments in such circumstances. Japan, Germany, and the US are especially reluctant to invest additional money in vehicles with automatic features.

12. A 94% reduction in road fatalities is made possible by self driving cars.

In 2016, the Department of Transportation reported about 37,461 deaths due to vehicular accidents. The data from the department claims 94% of these deaths were associated with human error.

But full utilization of self driving cars could help curb these human errors, thereby reducing 94% of deaths in road accidents.

13. A 2019 Reuter/Ipsos poll revealed that 64% of Americans would not buy a self driving car, and 63% said they wouldn’t spend more on self driving features.

This is most likely the case because there’s little knowledge or experience about this technology because very few Americans had actually seen or ridden in driverless vehicles. This distrust is one of the major problems for companies that invest in autonomous vehicles.

14. 75% of surveyed Americans said they want Congress to hold off on driverless cars until they are proven safe.

In the Public Policy Polling in 2018, the Consumer Watchdog Director noted that people feel the AV START Act is inadequate and that the Senate should listen to the people since the technology isn’t ready for deployment yet.

Around 79% of voters showed concern for their safety as a passenger, and 6% of them weren’t concerned at all. Another 59% think that self driving cars won’t be safe enough to use during their lifetime.

15. 67% of people worry about cybersecurity breaches due to the nature of this technology.

According to a survey done by AIG, people worry about access to personal information, credit card details, locations, and even the possibility of private conversations recorded within the vehicle. Around 39% of respondents think that self driving cars will operate more safely than the average human driver, and 27% think the opposite.

16. The first recorded pedestrian fatality by a self driving car was in March 2018.

It involved a 49-year old woman who was crossing the street, pushing her bike in Tempe, Arizona, who later died in the hospital. The self driving vehicle was an Uber Volvo XC90 with a safety test driver on board at that time. There was also a safety driver behind the wheel.

In 2016, around 6,000 pedestrians were killed because of auto traffic. They were most likely to be killed between 6 PM and midnight, usually due to the lower levels of visibility and greater rates of speeding.

17. Amazon paid $1.3 billion in cash to take over Zoox, a startup that was considered a self driving unicorn.

Amazon plans to put in at least $100 million in stock awards, keeping the 900+ staff members of Zoox. Amazon is putting a lot of investments into self driving technology. According to data from PitchBook, Zoox was valued at $3.2 billion in 2018, but it was expected to run out of money by July.

Aptiv partnered with Lyft and reported in February 2020 that it had successfully provided 100,000 commercial robotaxi rides in Las Vegas. These passengers have expressed willingness to ride in it again, and 98% of them rated their rides 5 out of 5 stars. The statistics on self driving cars show that the public has become more comfortable with self driving technology, which is encouraging.

19. In June 2020, Waymo announced its partnership with Volvo for an L4 vehicle.

On the 25th of June, Waymo and Volvo announced a partnership to integrate Waymo’s self driving technology in Volvo’s vehicular platform. It also has partnerships with other automotive companies such as Fiat-Chrysler, Jaguar, and Renault Nissan.

20. AutoX is the third company to receive a license to test drive on public roads without a safety driver.

AutoX is a startup company subsidized by Alibaba that now has permission to test one vehicle in a designated area in San Jose, with a speed limit of no more than 45 mph.

The other two companies that have permits for self driving cars testing are Waymo and Nuro. Currently, 62 companies have permission to test driverless vehicles with a safety driver.

It’s 2020, and the majority of consumers still don’t put their trust in autonomous vehicle technology for safety reasons, according to facts about self driving cars.

Though a number of automotive makers and tech companies predicted that they’d be releasing a Level 5 autonomous car this year, all of them continue to face challenges in different aspects of innovation.

Both potential passengers and manufacturers are at a point where they try to gather more information and experience with this technology. Improvements in artificial intelligence statistics and people’s perception of autonomous vehicles should make market penetration easier, though.

How much is a driverless car?

There are currently no fully autonomous (Level 5) cars available on the market. IHS Automotive forecasts that the price for self-driving technology will add between $7,000 and $10,000 to a car’s price in 2025.

Who benefits from self driving cars?

Investors and automotive makers claim that self driving cars could improve car safety, and that ride-sharing companies (such as Uber, for example), disabled, and elderly people would benefit as well.

How many self driving cars are on the road now?

It’s estimated that 10 million self-driving vehicles should be on the road by 2020, but this prediction turned out not to be true.

How many people drive driverless cars?

At the moment, Google has around 600 self-driving vehicles that are used by around 1,500 people, mostly in the Phoenix area.

How much safer are self driving cars?

Since human error causes 94% of all accidents in the US, driverless cars are estimated to drastically reduce their number.

How many accidents are caused by self driving cars?

According to a 2018 study, there were 38 crashes. Still, almost every one of them was actually caused by human assistance or other activity. In the US, there is around one death for every 100 million miles driven when traditional driving vehicles are in question, so self-driving vehicles should have considerably lower rates of accidents.

Are self driving cars reliable?

Generally speaking, they are reliable. You should note that humans are responsible for most of the self driving cars’ crashes. That said, accidents where they are involved should not make them less desirable or valuable.

How many self driving cars are there?

In 2019, there were 1,400 self-driving vehicles that were registered for testing across the US, as the relevant self driving car statistics indicate. They are owned by more than 80 companies across 36 states.